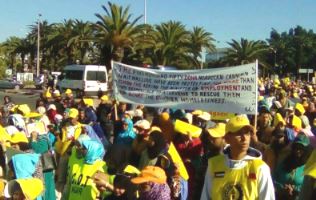 Over 500 workers in the Moroccan city of Agadir have been on strike since March 2015 at DOHA, part of the wealthy BICHA Group. DOHA workers, nearly 95% of whom are women, produce tinned fish and other products for worldwide export. The company, with the help of compliant legal and political authorities, has sought to dissolve the union, dismiss its members, criminalize and punish the strikers and confiscate the union leaders' home.

Workers at the Agadir DOHA plant formed a brand of the CDT in 2011. After a 20-day strike, local authorities under pressure from the popular movement sweeping the region urged the company to recognize the union. Beginning in 2014, however, management moved to have the union dissolved, imposed its own workplace delegates and stepped up pressure on workers. On March 6, 2015, management dismissed 51 workers, many of them CDT members. This provoked a strike, which continues to this day.

The company hired 500 new workers and sought punitive financial damages against active union members, including a claim for MAD 3 million (EUR 278,000) in damages from union leader Rahmoun Abdellah. In response to international pressure and the strong national campaign of the CDT Doha dropped all the charges against Rahmoun in February 2017. The struggle for reinstatement of the 540 workers and for union rights and recognition continues.

CLICK HERE to send a message to the DOHA company, calling on it to recognize the union, reinstate the dismissed workers and negotiate in good faith.