Supported by the IUF-affiliated National Federation of Food, Beverage and Tobacco Workers of Pakistan, over 700 contract agency workers at Unilever's last directly-owned and operated Lipton tea factory in Pakistan are stepping up their campaign for permanent job status. The workers will be launching a series of national and local actions, and urgently need your support.

Until August 31 of last year, Unilever had a second Lipton factory, in Karachi. That plant employed 122 permanent workers, and 450 casuals. But that was too many permanent workers for Unilever, so the plant was abruptly closed and production transferred to a former warehouse nearby - with 100% outsourced, temporary staff. 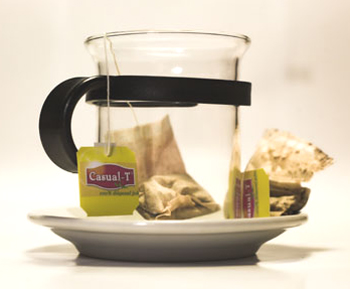 Destroying permanent jobs - could it make the most profitable beverage in the world?

Unilever's Khanewal factory employs 22 permanent workers, union members who are covered by a collective agreement. But another 723 workers are hired through six contract labour agencies.

The small number of permanent workers receive a monthly base wage of PKR 18,000 - some USD 226. The basic wage for those providing disposable, "temporary" work is PKR 6,000 if they're lucky enough to work a minimum 26 days. Otherwise the daily wage is PKR 232 - less than three dollars a day. Where permanent workers receive double for overtime/holiday work, agency workers simply receive the basic hourly wage. Disposable workers have no annual or medical leave. From one week to the next, they do not know their assignments or work schedules - or whether they will have work.

The majority of these workers have worked for more than 10 years at the Khanewal factory, with an average of 15 years and some as long as 30 years. But since they're not formally employed by Unilever, they are barred from joining a union of Unilever workers and bargaining with Unilever as their employer.

All of these workers should by law have been granted permanent jobs as soon as they completed 9 months of continuous employment. More than a decade later - and in some cases three decades later - they are still contract agency workers. These workers should not only have permanent employment status in accordance with the law, but they should be directly employed by Unilever. The labour hire agencies supply labour exclusively to the Unilever Khanewal factory. The agencies hold bogus addresses in the nearby town but in reality operate their offices inside the Unilever factory itself.

Two Lipton workers dismissed in August after 30 years of working at Unilever's Khanewal tea factory at minimum wage received no social security, medical benefits or pension. Workers like these built the profits which allowed CEO Niall Fitzgerald to retire from Unilever in 2004 with a GBP 17 million golden handshake.

Determined to build a more secure future, and to avoid the victimization which was the fate of workers involved in earlier struggles challenging precarious employment at the factory, the contract agency workers formed the Unilever Mazdoor Union Khanewal. Supported by the IUF-affiliated National Federation of Food, Beverage and Tobacco Workers of Pakistan, the union is assisting contract agency workers to file petitions in the Labour Court to secure their right to permanent employment. The union has organized rallies and demonstrations and publicized their struggle, but so far without success - the contract workers have not been made permanent, and Unilever has reacted viciously to similar efforts to end the company's disposal employment regime at other production sites. At the company's consumer product factory in Rahim Yar Khan, for example, where Unilever's employment practices are yet again the subject of a formal IUF submission to the OECD, Unilever fired close to 300 workers who announced their intention to struggle for permanent employment status. International support is urgently needed as the Khanewal union gears up for a new round of public action to press their case.

The Lipton workers are fighting for the right of workers everywhere to decent work - secure employment, a living wage, health and retirement benefits, and the right to join a trade union with a collective bargaining relationship to their real employer.

To support their struggle CLICK HERE to send a message to Unilever. Tell corporate management that the Lipton Khanewal temporary workers must be given permanent employment status - and the way to implement this is through direct negotiations with the affiliated National Federation of Food, Beverage and Tobacco Workers of Pakistan.

Copies of your messages will be sent to Unilever corporate and Pakistan management, to the union, and to the IUF secretariat.

You can give additional support by taking a moment to visit http://www.unilever.com/sustainability/. Scroll down the page to a section on the lower right entitled "Sustainability during the credit crunch" (as if sustainability varied with interest rates!). There you can "vote" yes/no to the question "Do you consider sustainability in your product purchasing decisions?" This is followed by "Please tell us what actions you are taking to make the world more sustainable", with fields for name/message. Please take a moment to send the following response, or a message of your own: "Sustainability is about investing in sustainable jobs - over 700 workers at the Khanewal Lipton factory are disposable workers hired through labour hire agencies, with no employment security and inferior wages and benefits though many have worked continuously for decades. Make the Khanewal workers permanent through direct negotiations with the National Federation of Food, Beverage and Tobacco Workers of Pakistan!"