The Ontario Federation of Labor has alerted the French ambassador of Canada to serious violations of labour law in the province by the French-based hotel chain Accor. The message was delivered by members of UNITE HERE, who paid simultaneous visits to the French Embassy in Ottawa and the French Consulate in Ontario to deliver a letter from OFL President Sid Ryan on November 15.

The action comes on the heels of the September 27 ruling by the Ontario Labor Relations Board that management of the French-based Accor hotel group consistently engaged in illegal activity in its efforts to thwart union representation for workers at the company-owned and -managed Mississauga Novotel. The violations, according to the board, were in fact so severe that it took the unusual step of awarding an “automatic certification” granting immediate union status to the 100 workers at the hotel. Charges filed by the union with the Board concerning two other Ontario Novotels, in North York and Ottawa, are ongoing.

“The Ontario Federation of Labour has singled out Accor’s anti-union behaviour at these hotels as a leading example of the need to strengthen protection for workers in our province,” wrote Ryan in his letter to the French Ambassador to Canada, Philippe Zeller. “I expect better from a French multi-national corporation. French-owned companies should be leading the way in setting a positive example for labour relations here in Ontario; not serving as a poster child for anti-union, anti-worker employer behaviour.” 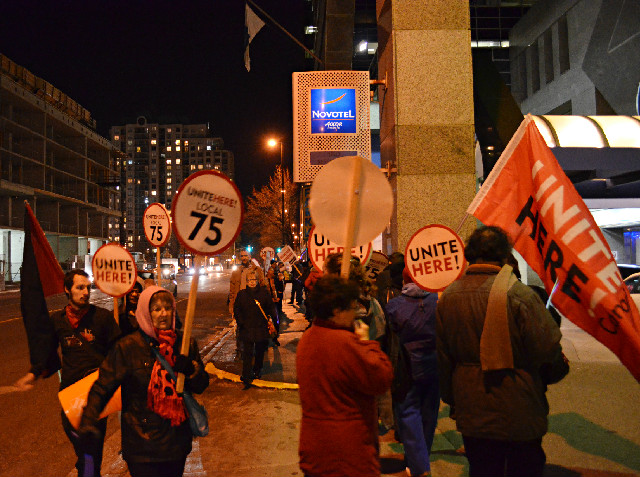 The visits to the French embassy and consulate were followed by a rally at the Novotel North York by union members and their allies to show support for workers at the hotel who have been seeking union representation for 3 years in the face of fierce management hostility.

Serial violations of trade union rights by Accor in Ontario, Canada and in Cotonou, Bénin, are the subject of an IUF complaint lodged with the French government’s National Contact Point responsible for implementation of the OECD Guidelines for Multinational Enterprises. That complaint is now ongoing for more than two years.

To date, Accor has shown no indication of cleaning up its act and conforming to international labour standards. In Cotonou, where the union has been pressing the company to negotiate a collective agreement at the hotel for many years (as required by law), management’s most recent proposal has been to eliminate seniority as an element of remuneration!