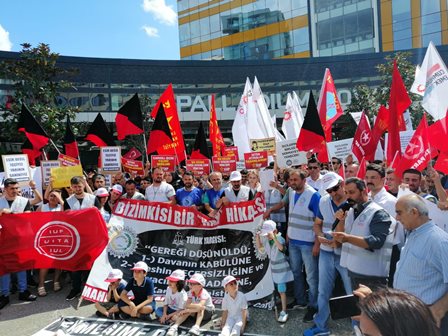 To mark 500 days of their ongoing struggle, the Cargill 14 gathered with other trade unionists and supporters in front of Cargill’s Turkish headquarters in Istanbul on August 30. This demonstration follows a court ruling in July 2019 that they were all dismissed solely as a consequence of their union activity – confirming what the IUF and Turkish union Tekgida-Is have claimed since Cargill brutally dismissed these workers 16 months ago. Cargill has appealed the decision and workers at Cargill Turkey are still waiting for justice to be delivered.

The IUF supports their fight for rights. In February 2019, twenty-four IUF affiliated unions representing Cargill workers in 15 countries sent an open letter to Cargill calling on the company to reinstate the workers and agree to measures to ensure that all workers at Cargill Turkey can freely exercise their right to join a union.