Home/News/Unilever workers and their unions protest in Rotterdam 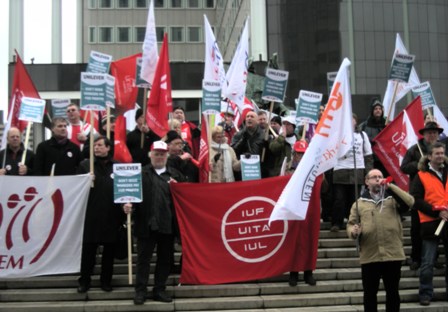 Over 100 European trade union activists gathered at Unilever European headquarters in Rotterdam in the Netherlands on February 16 for a noisy protest against the company’s attack on the pensions of workers in the UK. (see UK Unilever unions step up fight to restore snatched pensions.)

The demonstration, led by the UK unions UNITE, GMB and USDAW, was coordinated by the IUF’s European regional organization EFFAT together with the IUF and with the support of the Dutch union FNV Bondgenoten. On hand were union representatives from the Unilever European Works Council, and representatives from the IUF and EFFAT, and from ICEM and EMCEF (the international and European federations of mine, chemical, and energy workers unions). A declaration in support of the UK unions was presented to Unilever executive Rupert Chatwin on behalf of Unilever workers and their unions by a delegation from UNITE, EFFAT, the IUF and EMCEF.