The two-year war against thousands of peasant families and their organizations fighting to defend their lands and cooperatives and to reclaim land stolen by large oil palm growers in the northeast Honduran region of Bajo Aguán has taken a new innocent life. On January 20 two gunmen on motorcycles murdered Matías Valle, former vice president of the United Peasants Movement of Aguán (MUCA).

According to MUCA General Secretary Yoni Rivas, “There’s no doubt this new murder is connected with the current land conflict in Bajo Aguán and the large landowners. They want to pressure us into accepting the proposal from the government and the private banks to buy these lands. We have rejected this agreement already, because what they’re really trying to do is strangle us financially. They want to put us into debt so they can then come and take away the land that has cost us so much sacrifice.” 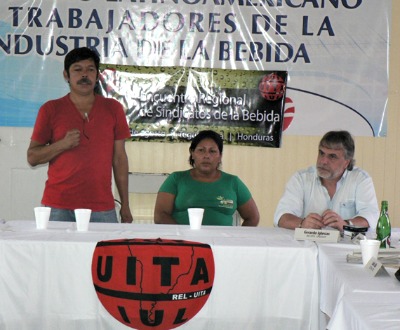 Valle (standing in photo) was vice president of MUCA until mid-2011, and a member of the negotiating committee which in 2010 signed the first agreement with the government in an attempt to regulate the conflict unleashed by the appetites of the big palm oil producers. In August 2010 Valle and another peasant leader, María Gutiérrez, were invited to Tegucigalpa as representatives of MUCA to participate in the third meeting of the Executive Committee of the Latin American Federation of Coca-Cola Workers (FELATRAC), organized by the IUF, to give their testimony of the peasant struggle in Bajo Aguán.

Extensive reporting on the conflict is available on the website of the IUF Latin American regional organization here where you can also find the report and recommendations of the international human rights mission to the region organized with the participation of IUF Latin America.