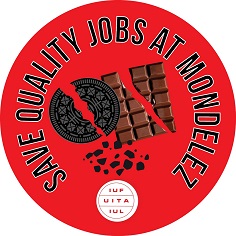 Canada’s Ontario government is rewarding Mondelez a cash gift of 22.6 million Canadian dollars for skills development and capital investment at its non-union East York (Ontario) facility. Over 5+ years, the East York facility has received production from the company’s now shuttered Lakeshore (Toronto) and Montreal facilities. Together these two closed facilities employed about 1,000 workers – all members of IUF union affiliate BCTGM.

While Mondelez receives government financial handouts, it aggressively cuts costs including frequent layoffs, in order to buy back shares and generate returns and dividends for the company’s shareholders and top executives. Many Mondelez workers (union and non-union alike) have been abandoned by the company in the last two years with 16,000 Mondelez workers rendered redundant or transferred to another employer between December 2015 and December 2017.