Home/News/Back again on the streets, workers affirm their commitment to keep fighting for rights at Cargill Turkey

Workers dismissed for joining the IUF affiliate Tekgıda-İş at Cargill Turkey 846 days ago held a rally and press conference in front of the company’s Bursa-Orhangazi factory – the starch factory they were dismissed from – on August 10 to announce their determination to keep fighting for reinstatement and respect for trade union rights.

The workers and the union have maintained their solidarity and fighting spirit throughout the COVID-19 lockdown. Their demonstration announces their determination to keep fighting now that restrictions on public action have been lifted. At the rally and press conference, the union thanked the IUF for the ongoing support which has helped them keep up the struggle, and declared that Cargill Turkey workers who want a union will never stop fighting together with Tekgıda-İş. 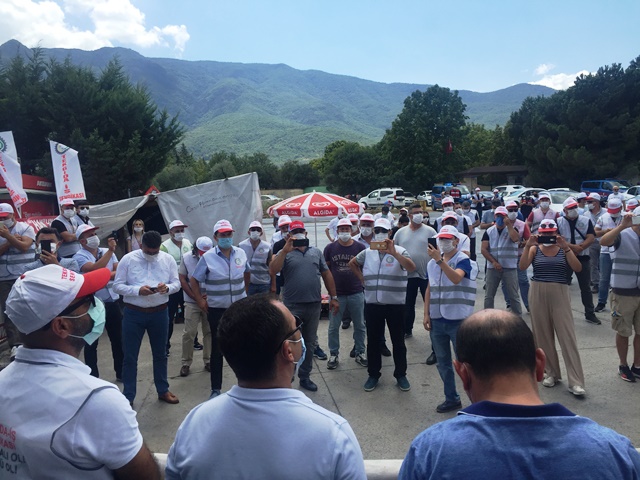 Public union action will now move to Istanbul, where Cargill Turkey has its headquarters. The workers will be maintaining a permanent 4-day protest demanding their reinstatement, and then move to actions aimed at Cargill customers, including Fastad, which supplies Istanbul Burger King restaurants, and transnational customers including Coca-Cola, Dr. Oetker, Mondelez and Nestlé.

The IUF and its worldwide Cargill membership will be alongside them every step of the way.