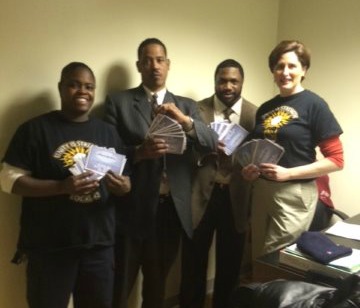 Members of the IUF North American affiliate BCTGM have provided tremendous support to the IUF campaign to hold the company to account for alleged human rights violations. After union officials distributed over 3000 handbills to members working at Mondelez locations in 5 states informing members about the Screamdelez campaign, members have signed postcards to CEO Irene Rosenfeld demanding she talk to the IUF. Workers at Mondelez facilities in Atlanta, Georgia (see picture) Richmond, Virginia, Philadelphia, Pennsylvania, Chicago, Illinois and Portland Oregon signed 2065 postcards.
The company response in Chicago and Richmond has been to harass union officials in an attempt to restrict access to their members and these actions are being vigorously challenged by the union.  Ms Rosenfeld has also received postcards from Pakistan and several European countries.
IUFPostcards.jpg