In Belgium, “zero-hour contracts” have been banned since 1989 as part of the fight against undeclared jobs. This has helped unions to negotiate sectoral collective agreements with employers for the HORECA sector (hotel, restaurant and catering) which have helped secure stable employment and set minimum wages.

The right wing government is now attacking these achievements with a plan to create “flexi-jobs” which would allow employers to negotiate wages below the agreed minimum and with no minimum weekly working hours on the basis of oral employment contracts.

The IUF-affiliated CSC-ACVV took part in a demonstration on October 7, in Brussels, against a draft bill being pushed by the government which would reduce the number of full time contracts and force workers to accept wages below the negotiated minimum. 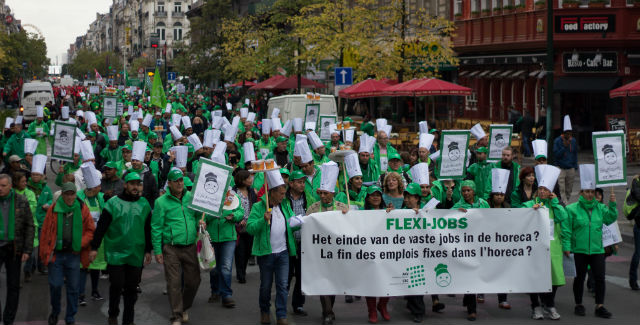