Published: 07/11/2014
Belgian trade unions brought 130,000 people from across the country on to the streets of Brussels November 6 to condemn the government’s austerity program. The measures would reduce wage earners’ purchasing power by 2% annually through changes to cost-of-living indexation, impose limitations on wage bargaining, reduce unemployment benefits and support for young job-seekers and raise the retirement age from 65 to 67 years, among other regressive measures.

Unions are united in condemning these measures and in demanding tax justice and employment-creating investment. 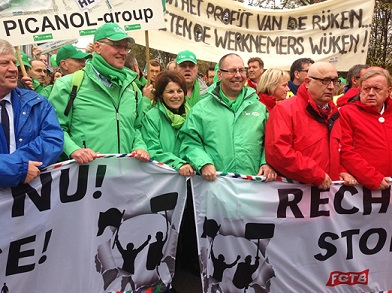 Regional actions and strikes are scheduled for the coming weeks and the unions will hold a national strike on December 15 in the absence of meaningful negotiations.