After more than eleven weeks on strike, members of the IUF affiliated UNITE HERE Local 26 in Boston have unanimously voted in favor of a new agreement with the Battery Wharf Hotel. 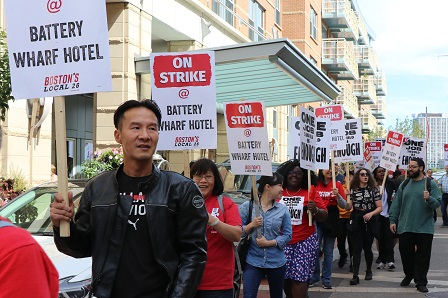 Since the UNITE HERE Marriott Strike of 2018 (read more HERE and HERE), the Battery Wharf Hotel is the last full-service hotel in the area to agree to a contract that also ensures affordable healthcare, and provides enough income for hotel workers to support their families.

Participants in the October 2019 HRCT Trade Board Group meeting in Boston visited striking workers on the picket line to show global support for their long fight.