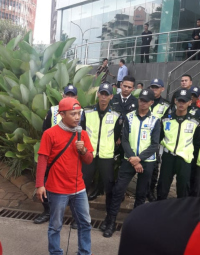 Coca-Cola Amatil Indonesia is taking disciplinary action against the president of the independent, democratic union at Coca-Cola Bandung, Sovi Fradina Mardani Masrip, for informing his members of their legal rights. When management launched a retrenchment program, workers asked questions in a WhatsApp Messenger group about the proposed separation pay. Sovi Fradina responded by sharing information on separation pay according to the law and how these legal entitlements are calculated. Management  immediately issued a third and final warning letter against Sovi Fradina on October 19 accusing him of “deliberately disseminating information to employees” that disrupted the retrenchment program and caused harm to the company. By issuing a third warning letter (and bypassing a first and second warning letter), management declared this a serious offense that will lead to suspension and possibly termination at any time in the next six months, up until April 19, 2019.

On October 23, the IUF-affiliated federation of food and beverage workers,FSBMM, wrote to Coca-Cola Amatil Indonesia management calling for the withdrawal of disciplinary action on the grounds that Sovi Fradina  “shared the correct information on workers rights according to the applicable regulations and laws”. Management replied that the disciplinary action is in accordance with Coca-Cola Amatil Indonesia’s regulations where “every worker must maintain the company’s good reputation and maintain a harmonious atmosphere in the company”. In other words, information about their rights according to the law caused workers to reject the separation pay on offer, since the company was planning to pay less than their legal entitlements. This apparently disrupted the retrenchment program and harmed the company’s reputation.

The action against the president of an independent union for informing members of their legal rights follows the termination of union presidents Atra and Lutfi.