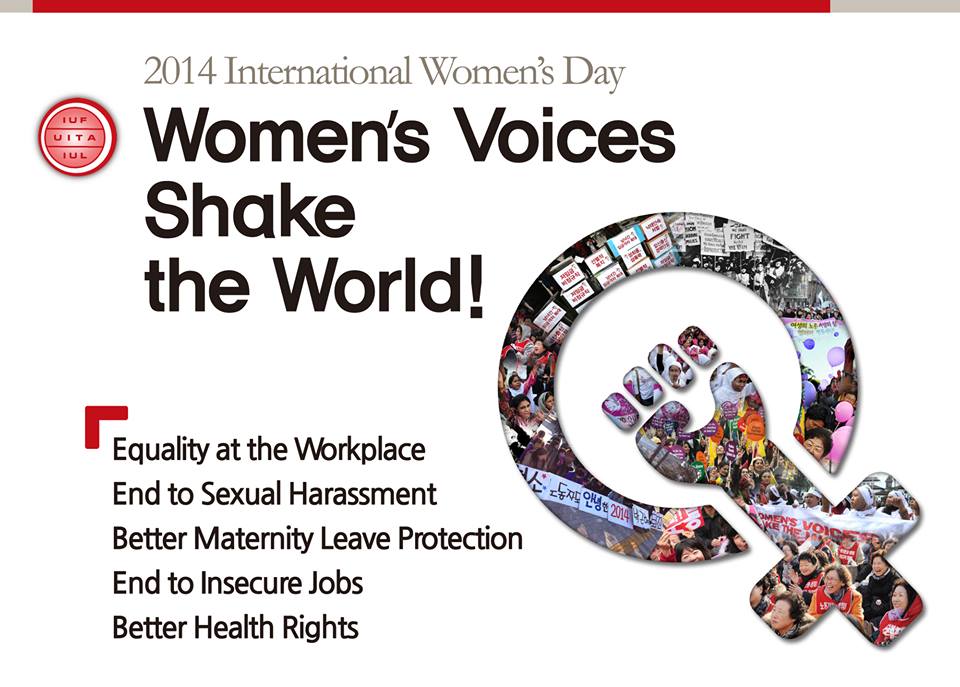 The global pay gender gap continues to widen under the impact of recession, austerity and attacks on public services from the (unacceptable) average of 20% recorded 6 years ago. The continued denial to working women of equal pay for work of equal value is but one convenient metric of the inferior status of women. In many parts of the world, women continue to suffer discrimination, violence, sexual harassment and unequal access to education, social security and civic and legal rights.The gender pay and social gaps are greatest in low-wage sectors where unions are weakest, and in particular in agriculture, hotels and tourism and domestic work in the IUF sectors.

On March 8, 2013 meetings and mass rallies were held in 11 cities in 6 countries in the Asia-Pacific region, including India, Indonesia, Pakistan, the Philippines, Malaysia and Thailand, under the banner “Women’s Voices Shake the World”. On March 8, 2014 more affiliates in more countries are planning bigger, louder actions in more cities across all the IUF regions – and they’ve produced the poster you see at the top of the story to emphasize their struggles

International Women’s Day traces its origins to March 8, 1857 when textile workers on New York’s Lower East Side demonstrated for their rights. On an international level it was launched in 1910 at the 2nd International Socialist Women’s Conference in Copenhagen and first celebrated in 1911 by millions of workers in Austria, Denmark, Germany and Switzerland.

International women’s Day is a product of the socialist labour movement, and it remains as true as ever that union membership is the best defense against discrimination. The most important fight is for the right for all workers to join and be represented by a trade union.

Many IUF members will be taking action as part of the Make up my Workplace – Dignity for Hotel Housekeepers! initiative we launched last year. Housekeepers – overwhelmingly female, frequently migrants – suffer from low pay, employment insecurity, and fierce opposition to union organizing in a job which has become one of the most physically debilitating under the impact of ferocious speedup. The initiative has many facets but is above all aimed at raising levels of union organization and activism among housekeepers – to learn more click here.