On August 12 – International Youth Day – young fast food workers in the Philippines mobilized to protest against the systematic theft of wages by companies like McDonald’s through policies that impose forced unpaid overtime at the end of every shift.

According to surveys conducted under the Respect Fast Food Workers Alliance (RESPECT!) with APL-Youth and SENTRO, McDonald’s “turnover work” policy requires workers to work an average 41 minutes at the end of each shift, with lost wages equivalent to about 10% of their pay.

With the slogan “Quarenta y Uno”, in reference to the 41 minutes that young workers are forced to work for free without pay, APL-Youth and SENTRO held a public street performance in Manila on International Youth Day to call for the arrest of Ronald McDonald for wage theft.

As the campaign against wage theft escalates protest actions will also be held in other cities in the Philippines, including Davao, General Santos and Batangas. 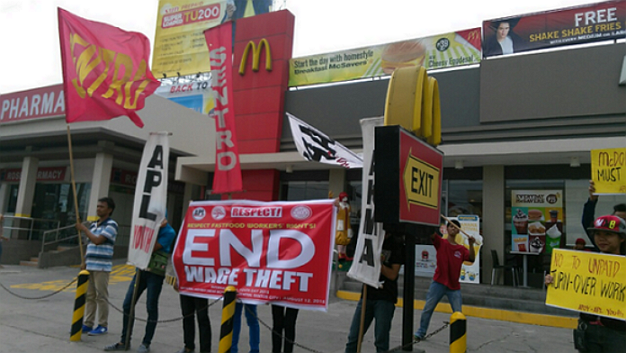