Home/News/Fear prevails at Coca-Cola Ireland, where union members have to hide their faces

Published: 19/06/2018
A climate of fear and intimidation reigns at The Coca-Cola Company’s (TCCC) concentrate plant in Ballina, Ireland, where management refuses to recognize the union and harasses suspected union supporters.

Over 250 workers lost their jobs when Coke closed its directly owned, strongly unionized concentrate plant (where the “secret formula” syrup is manufactured) in Drogheda some ten years ago. In May this year, TCCC announced the closure of the last remaining unionized plant, in Athy. At the Ballina plant, the last of the company’s factories in the country, union membership has grown beyond the proposed bargaining unit, but the company persists in refusing to recognize the IUF-affiliated SIPTU.

Workers at the plant report targeted intimidation against employees suspected of supporting and promoting union membership, who may, for example, receive lower performance ratings resulting in a loss of income. In this environment, the union keeps confidential the names of its members in order to minimize the risk of management retaliation.

SIPTU members at Ballina have expressed their support for ongoing rights struggles within the Coca-Cola system, but only on condition that their faces cannot be identified. 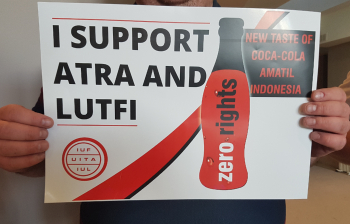 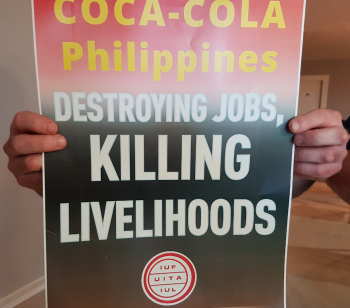 Coke’s concentrate plant in Ireland is owned and operated by the Company itself. The IUF holds corporate management in Atlanta, USA directly responsible for these egregious violations of human rights. We expect clear instructions from corporate headquarters to local management instructing them to ensure that all workers can freely access their union representation and bargaining rights without threat of intimidation and retaliation.