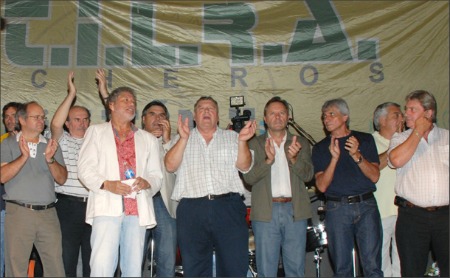 The inauguration of the new national board of the Argentinian Dairy Union, ATILRA was held on January 8 where General Secretary Hector Luis Ponce was applauded on his election for a further four year term. ATILRA has 27000 members who all work in the dairy sector, a large increase since Hector Ponce was first elected General Secretary 12 years ago.ATILRA delivers good outcomes in collective bargaining and also delivers on the four pillars of its strategy to provide better lives for members and their families through education, health, technology and communication.Investment in education and health reduces inequality between people in urban areas and the rural areas where most ATILRA members live and work.

Hector Ponce said his goal for the next four years was to grow the family of dairy workers in a way in which every dairy worker becomes a delegate for their own class interests. In March this year, ATILRA will open an education center and host an international dairy union conference.