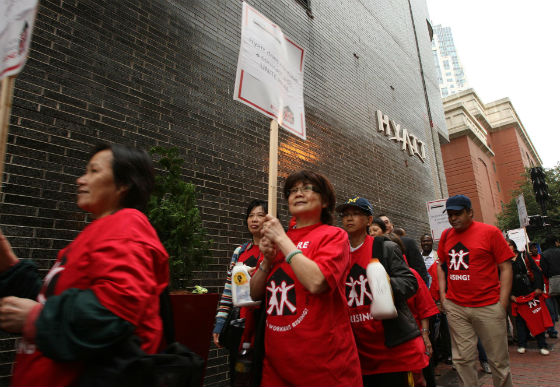 The Boston branch of IUF-affiliated UNITE HERE! has reached an agreement with Hyatt Hotels to compensate 98 Boston-area housekeepers who were fired five years ago and replaced by lower-paid outsourced workers. Workers had been asked to train the people not knowing they would replace them – with greater workloads at minimum wages.

The compensation will total USD 1 million, with workers paid according to length of service. UNITE HERE! will suspend their boycott of the three Boston-area Hyatts, which the union estimates to have cost the hotel chain some USD 6 million.

At the beginning of July 2013, UNITE HERE! and Hyatt reached an agreement which resolved longstanding issues – read more here.