On July 2 2011, delegates to the National Conference of Women Dairy Workers reported that women workers in the world’s largest dairy industry face wage discrimination, excessive working hours, increased night work, denial of opportunities for promotion, precarious employment, and access to even the most basic facilities such as separate toilets and changing rooms.

Contract workers employed continuously for 5 to 9 years are denied the same wages and benefits of permanent workers who are covered by collective agreements, and even basic legal entitlements like provident funds (pensions) social insurance are not paid. Many contract workers cannot even get hold of their account numbers to see if employers have made the legally required payments over the years.

For permanent workers discrimination in promotion is a major issue. Sarojamma, a dairy operator at Bangalore dairy for the past 30 years has not had any promotion or change in job assignment despite her seniority. “I’m doing the same work I was when I was a young woman and at my age it’s very hard,” she said.

Geetha, who has had no opportunity for promotion in the past 12 years, is a degree holder and qualified chemist at the Dharwad dairy. While the men who do the same work as her are designated “chemists” she is designated “senior technician” and paid less. This is despite the fact that she has more responsibility than the male “chemists”. 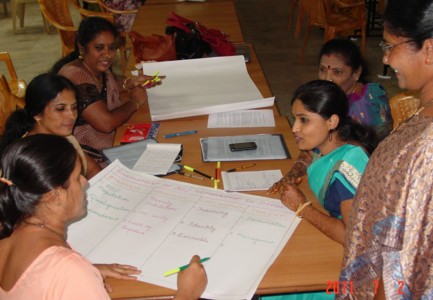 After a lively discussion and collective effort a series of action points were adopted by the conference. The delegates then formed a Women’s Action Committee under DEFOI to implement the plan and promote this agenda within their unions.