Members of the IUF’s Malaysian affiliate NUHBRW held a protest action at the Grand Millennium in Kuala Lumpur on March 12 in response to management’s attempt to remove service charge entitlements from the collective agreement, which would let the hotel use the service charges to bring wages up to the new legal minimum and retain the balance.

Hong-Kong based Shangri-La Hotel is a leading force in introducing this system into new collective agreements and has lobbied other hotels to follow. This allows hotel employers to profit from a minimum wage law intended to bring workers’ pay above the poverty line. 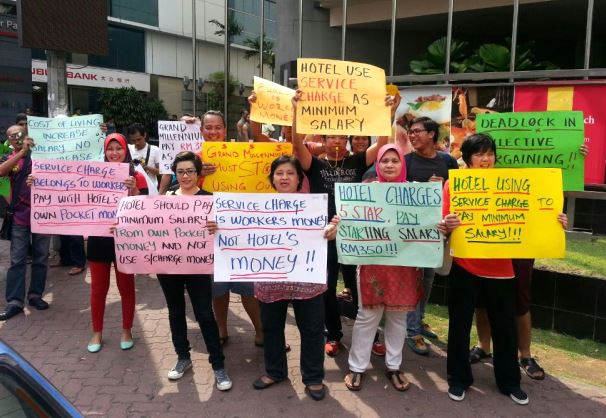 NUHBRW has succeeded in retaining service charge distribution and securing wage increases in some agreements but pressure from Shangri-La has led most hotels to deadlock the negotiations, which then wind up in to court.