At the June 1 meeting of the Nestlé European Works Council in Geneva, Switzerland, representatives of twenty Nestlé unions from across Europe collectively called on the company to immediately halt all attempts to weaken the IUF’s affiliate at the Nescafé factory in Panjang, Indonesia. The unions insisted that Nestlé enter into the wage bargaining talks the union has been demanding for 3 years.

The letter addressed to Nestlé CEO Paul Bulcke and signed by all representatives, was handed to the head of Nestlé European management at the opening of the meeting. The letter states:

We, the undersigned, participants in the Nestlé European Works Council, meeting in Geneva on June 1, 2010, are deeply angered to learn that management still denies the right of the Nestlé Indonesia Workers Union (SBNIP) at the Nescafé factory in Panjang, Indonesia, to negotiate their wages through collective bargaining after requesting this continuously since 2007. We are equally angry to learn that Nestlé will ‘agree’ to what is in fact a fundamental human right only on condition that an organization encouraged and supported by management, the Communication Forum of Nestlé Indonesia Workers (FKBNIP), participate in what would then cease to be genuine negotiations. We are angry to learn that after years of efforts by the SBNIP and a commitment by Nestlé to the IUF that wages would be bargained in good faith with the SBNIP, wages for 2010-2011 have again been imposed unilaterally by management.

Supporting a management-sponsored union in the workplace, discriminating against the SBNIP and its members, refusing to engage in good faith collective bargaining are all fundamental violations of international law and Conventions of the ILO. We call on you to ensure that all active support for the FKBNIP is immediately dropped, all harassment and discrimination against the SBNIP, its members and its officers comes to an end, and to take immediate measures to resolve the conflict by ensuring that Nestlé Indonesia management enters into direct good faith negotiations with the SBNIP for a new collective agreement which meets the union’s legitimate demands.

After the Nestlé union representatives kicked off the meeting by conveying these very clear and concrete demands, Nestlé management representatives proceeded to business as usual: presentations containing little useful information, but with explicit messages concerning “challenges” to the business and implicit messages about the need for workers and their unions to be fully “aligned” (and the consequences when they aren’t). The presentations included a sneak preview of Nestlé’s new Corporate Business Principles, a document woefully lacking in substance, based on the assumption that the underlying policies are already well-established and can be downloaded from the Nestlé website. 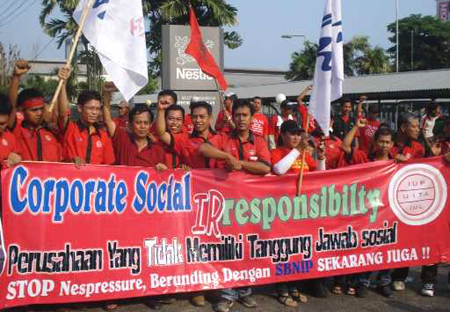 SBNIP members rally for their rights outside the factory on June 3.

You can support the Nestlé Panjang workers – CLICK HERE to send a message to Nestlé.

Click here to learn why the IUF recently downgraded Nestlé’s CSR rating – from B+ to Junk!