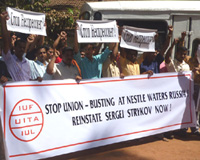 The unions, members of the IUF-affiliated Federation of All India Nestle Employees, condemned union-busting at Nestle Domodedovo and demanded the reinstatement of the union vice-chair Sergei Strykov. 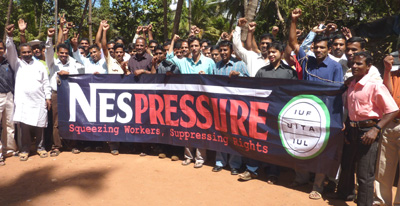 Last year Nestle unions in India won collective bargaining rights with the support of the IUF’s global Nespresure campaign, and are now extending the same global solidarity to Nestle workers in Russia.

Six days earlier, on February  19, Nestle workers picketed the gates of the company’s factory in Montevideo, Uruguay, to demand rights and recognition for Nestlé workers and their unions in Russia and Indonesia. 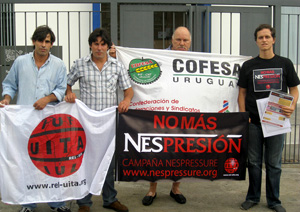 Stop Nespressure! You can support the struggle at Nestlé Waters in Russia – CLICK HERE to  send a message to Nestlé Russia’s Human Resources Director and to corporate management in Switzerland.