Published: 19/12/2014
IUF-affiliated Indian sugar workers demanding justice for murdered Philippines sugar activist Rolando Pango followed up solidarity actions on December 10 with more demonstrations at two sugar mills in the Indian state of Maharashtra on December 15. Hundreds of workers at two major cooperative sugar factories in the Ahmednagar district stopped work to demand that the killers be brought to justice. The demonstrations were organized by the Maharashtra Rajya Rashtriya Sakhar Kamgar Federation and the district union organizations, who have highlighted the rising incidence of human rights violations in the sugar sector and the need for international solidarity. 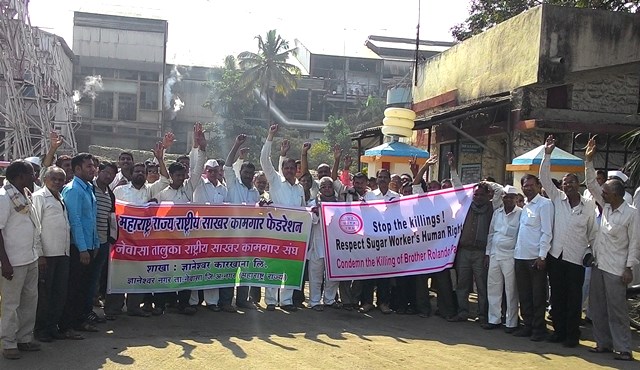 You can show your solidarity – CLICK HERE to send a message to the government of the Philippines calling for an urgent investigation and prosecution of those responsible for the killing!