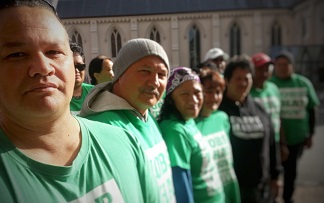 The New Zealand Supreme Court has dismissed Talley/Affco’s challenge to the Court of Appeal ruling that the company unlawfully locked out workers at the beginning of the 2015-16 meat processing season.

Talleys/AFFCO locked workers out in an effort to force them to sign on to company determined individual employment agreements. By doing so the company not only locked out workers unlawfully but also violated their rights to collective bargaining and freedom of association.

Union members at the Wairoa plant were without pay for 5 months.

The IUF affiliated NZ Meat Workers Union will now seek compensation for lost income on behalf of its members.