On April 11, 2017 McDonald’s Korea announced the recognition of IUF affiliate Arbeit Workers’ Union as the collective bargaining representative for McDonald’s workers. The union formally established a McDonald’s chapter in November 2016.

A first meeting was held on June 16, and a second one is scheduled for July 21 during which parties will discuss ground rules. After this first step Arbeit Workers’ Union will submit the list of demands, and negotiation for the first collective agreement will formally start. 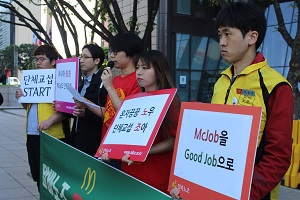