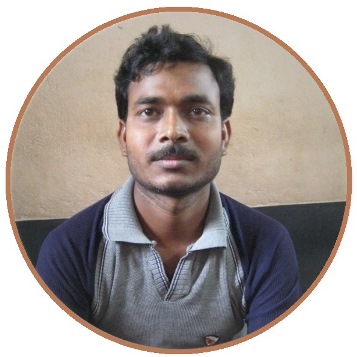 Former warehouse worker Dilip Naskar has twice been fired for defending his rights and those of his workmates.  The first time, as a worker in a warehouse in West Bengal, India providing exclusive services to PepsiCo. Dilip was one of 162 workers who were sacked (CLICK HERE TO SEND A MESSAGE TO PEPSICO) in 2013 after they formed a union. Twenty-eight of these workers including Dilip refused to accept a return to work under illegal and degrading conditions and formed an Action Committee to fight for their rights. Dilip eventually found work in a nearby factory, but was sacked after one month on the job when his boss found out he was one of the twenty-eight.

At the time of his dismissal, Dilip’s daughter was just beginning school. His inability to find stable, decent work means that his daughter’s health and education have suffered. Dilip is unable to afford sufficiently nutritious food for his daughter, who is underweight and frequently ill. “The company has destroyed my daughter’s health”, says Dilip, who nonetheless insists that a return to work at the warehouse or a PepsiCo bottling operation must come with guarantees that the 28 workers’ rights will be respected.

While Dilip and the other Action Committee members grapple with unemployment and poverty, PepsiCo top management and shareholders are binging on share buybacks and dividend hikes. Earlier this year, PepsiCo announced a share buyback program of up to USD 12 billion, and a 7.3 percent increase in the dividend.

Tell PepsiCo to stop squeezing human rights! – CLICK HERE to send a message to the company