Spanish unions are building for a national general strike on September 29 to protest the government’s massive austerity program, which would cut public expenditure and investment, and a labour market “reform” which makes it easier and cheaper to fire workers. Paco Dominguez, General Secretary of the Federación de Comercio, Hostelería-Turismo y Juego-UGT (CHTJ-UGT), explains what is at stake and how the union is building support.

Why should unions reject the government’s austerity program, and what concrete measures do you propose to stimulate job creation, real investment and a strong public sector?

For the UGT the question is not whether reductions in government spending are necessary or not at a time of financial crisis; the issue is that the cuts, as always, take us down the path of “social adjustment”.

The consequences of the crisis are especially hard for workers and the poor, which is why we maintain that now, more than ever, social policies are needed which can address the crisis in terms of social justice and alleviate the perverse effects of the economic contraction, particularly for the worst off. 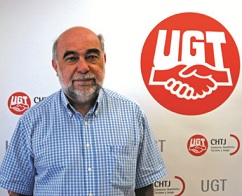 This is why we believe that the state, more than ever, must play an active role, essentially by adopting social and economic “shock plans” in which a strong public sector acts as a crucial factor of economic stimulus

How do you the strike and mobilization in Spain within the larger project of fighting back against austerity, reductions in public spending and further labour market deregulation in Europe?

We strongly believe that the measures adopted by European governments at the urging of the EU will not only fail in strictly economic terms; they are also a serious setback to the welfare state and workers’ rights.

European competitiveness cannot and must not rely on low wages, less social protection, less government, and an endless stream of neo-liberal recipes, because there will always be a country which produces more cheaply. On the contrary, Europe must promote economic growth based on social responsibility and justice.

In our country, specifically, these measures would distance us from the European average in social protection and wages, condemning present and future generations to a precarious labour market and unemployment.

How are you building support for the strike, not just with your members but reaching out as part of a wider mobilization?

With the strike, and the preparations, we have to show that we consider this reform to be more aggressive and damaging than any in the past. We’re using meetings in workplaces and meetings open to the public as well as explanatory campaigns in all the media and communication platforms using on the new technologies as a necessary way of reaching the young.

September 29 must be a turning point in the retreat of the workers and the welfare state. That is why the CHTJ-UGT is working to have these measures withdrawn, in order to halt the headlong freefall pursued by our government.