Home/News/Save Jobs, Save the Future: NO to job destruction in Coca-Cola Amatil Indonesia! 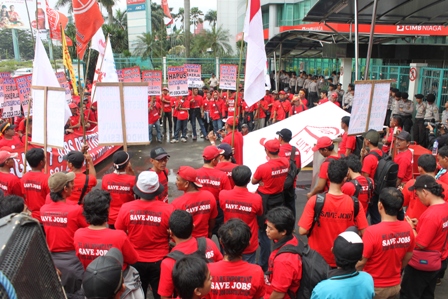 Workers at Coca-Cola Indonesia’s operations in West Java organized a protest action at Coca-Cola Indonesia head office in Jakarta against jobs destruction on February 24 after management refused to engage in negotiations concerning the employment status and rights of over 1,800 contract workers. Instead management responded by unilaterally redefining “core” and “non-core” positions to exclude the vast majority of permanent workers from core positions. In the bottling operations just 7% of workers in production are defined as “core” under the new policy.

On three occasions (7th, 11th and 24th October 2013) the union attempted to engage in meaningful negotiations on the issue of precarious employment, discrimination, arbitrary wage reductions, transport allowance and a brutal policy that transfers any non-payment by clients to bad debt held by sales workers themselves.

At the Cibitung bottling plant management announced on November 21, 2013 at 3PM only operators and inspectors are categorized as core work and all other positions are categorized as non-core work. The union wrote to the company on November 22 calling on the company to withdraw this policy because it threatened the job security of both permanent and non-permanent workers. Coca-Cola Amatil management responded by reaffirming that only operators and inspectors are classified as core positions in manufacturing and only salesmen are classified as core positions in distribution. All other job categories are defined as non-core.

In distribution only 520 workers will be “core” out of 1,110 workers. In the bottling plant there are 993 contract workers and 619 permanent workers. Of the permanent workers there are only 94 operators and 16 inspectors. The figures indicate that only 110 workers or 7% of the total production workforce will be classified as “core”.

Since November 27 the union has held rolling protest actions with banners that read “Against job Destruction in Coca – Cola Amatil Indonesia”,” Save Jobs – Save the Future, No to job destruction in the Coca – Cola system”.

The protestors supported by IUF affiliated FSBL unions from Lampung: SBNIP, SBMUJA, SPKMF, SPMSL and SBNIC from Tangerang held a peaceful demonstration from 9am to 5pm on Monday, February 24, 2014. At 2:30pm management called 5 union representatives to meet and simply reiterated that the union’s demands to reverse the unilateral redefinition of core/non-core and address job security concerns cannot be granted and there will be no negotiation.

The long term employment of contract workers excluding them from access to the same rights and collective bargaining agreement coverage of the permanent workers in Indonesia shows the company’s intention to maximize profits through creating disposable jobs. The IUF fully supports Coca-Cola Indonesia workers in their protest actions against this unfair move.