Home/News/Spain: trade unionists convicted in continuing government attack on the right to strike

Published: 20/07/2017
The government of Spain continues its attack on the right to strike, a fundamental human right. On June 17, two UGT union representatives were convicted by a Madrid criminal court of taking part in a peaceful informational picket in Madrid during the March 29, 2012 general strike (see The Airbus 8 and the right to strike: unfinished business. Rubén Ranz and José Manuel Nogales were found guilty by a Madrid criminal court and each fined EUR 1,825 under article 315.3 of the Criminal Code, a legislative vestige of the Franco era which the Rajoy government has revived. mso-bidi-font-family:Arial”> 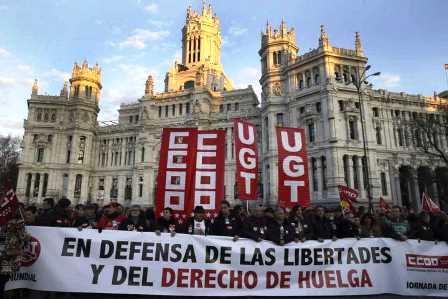 The 7-year ‘exemplary’ prison terms demanded by the state prosecutor were not imposed, but the conviction sustains the use of fascist-era repressive legislation to attack a fundamental human right. The union will appeal the convictions as well as the fines. The law remains in the criminal code, a gross violation of Spain’s international human rights commitments.
Spainrighttostrike2.jpg
Spainrighttostrike.jpg