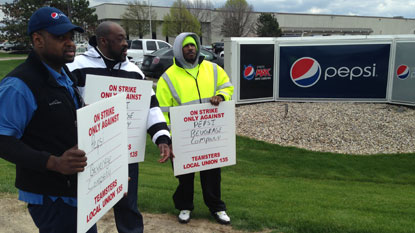 A 10-day strike involving about 350 IUF-affiliated Teamsters members who work at a PepsiCo bottling plant on the Northwest side ended after they approved a new five-year contract.

The agreement gives raises of $1.95 an hour over five years, boosting the average hourly wage to $21.50, said Jeff Combs, a representative for Teamsters Local 135. The contract covers drivers, mechanics and warehouse workers.

Workers had been picketing since May 1 because of rising health care costs. PepsiCo said in a statement when the strike began that they’d agreed to the union’s healthcare proposal and offered a plan in line with others across the country. Combs said that while the company did offer an $18/week pay increase, they also planned to implement a $15/week rise in health care costs.

The agreement also allows Teamsters to remain in the union health care plan rather than being moved into a company-administered plan.

Workers approved the contract by a 2-1 ratio in a vote Saturday morning. The union ended the strike at 10 a.m. Saturday, and Teamsters were back on the job Sunday.