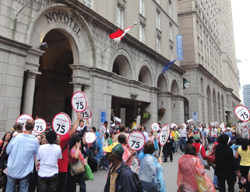 Members of Unite Here! walked off the job early on the morning of June 24 just as members of the G20 French delegation arrived at Canada’s Novotel Toronto Centre hotel, part of the French-based Accor Group. Troubles have been brewing at Accor across Canada, where union organizing for union recognition and collective bargaining rights has met with fierce opposition from management, and more widely through the Group’s operations.

The union took strike action at the Toronto Novotel after the hotel management walked away from negotiations on June 22 without even responding to a bargaining proposal from the Unite Here!

“After sitting on our proposal for a month, they finally tabled their first and only proposal on Tuesday and then walked out the door at 5:00 PM, said Paul Clifford, President of Local 75 which represents the hotel workers.. “That is not collective bargaining by anyone’s definition. The labour dispute at this hotel is entirely due to Accor’s heavy handed bungling of negotiations.”

Within an hour of establishing their picket line, the workers inflated a giant rat – a symbol of Novotel’s refusal to negotiate good jobs that would contribute to the economic recovery, says the union.

Edith Mullen, the union steward for room attendants who has worked at the hotel for 12 years. told the Toronto Star “I would like to see workers able to make it to retirement without being crippled.” room attendants are required to clean 16 rooms in an eight hour shift with just a half-hour lunch and two 15 minute breaks.

“Most people don’t take those,” Mullen told the Star.

“There are a lot of injuries — back, knees, shoulders — from doing the same thing over and over again.”