Published: 07/11/2016
Bloomberg announced on November 1 that Unilever has signed a four-year agreement with Seattle, Washington-based Convoy Inc., a “Startup that aims to become an Uber for trucking.”

The deal, according to Bloomberg, “Will have Convoy connect Unilever to trucks for tens of thousands of shipments a year and is worth millions of dollars over the next year.

“Convey uses software to match companies needing tractor-trailers with smaller providers, line up deliveries and track them to better ensure on-time pickup and receipt. It’s particularly important as car ride-hailing app Uber Technologies Inc. gets into the freight market through its acquisition of Otto.”

Uber’s expansion into freight transportation aims beyond eliminating fixed employment in road transport; the company ultimately seeks to eliminate drivers through “autonomous trucks” for commercial delivery. Uber recently teamed with brewer giant AB InBev to send a driverless truck loaded with beer down 120 miles (193 kilometers) of a major US highway. Uber plans to merge its newly-acquired driver technology with its “marketplace app”.

Unilever has publicly committed to reducing the use of non-permament workers within its own manufacturing, stating in its 2015 Human Rights Report that “If a person is working in a Unilever factory year-round and involved in the production of a Unilever product (as opposed to providing a service such as catering or security), unless the role is temporary due to seasonality or mechanisation, or is only for a defined time, that role should be permanent and not relegated to contract status.

For workers within what Unilever calls its “extended supply chain” there is no commitment to promoting direct, permanent employment, but a commitment to “ask our suppliers to ensure that their key Human Resources policies on hiring, promotion and termination do not inhibit trade union membership or activity and to ensure the effective implementation of legally binding collective bargaining agreements.” Unilever has committed to ensuring that suppliers pay a living wage and assure a safe and healthy working environment. 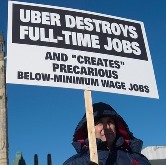 Where do companies, like Convoy, that effectively work to eliminate permanent employment in logistics enter into Unilever’s Responsible Sourcing Policy – and can they be confined to the supply chain?

The London Employment Tribunal on October 28 ruled that Uber drivers are workers in an employment relationship, not ‘self-employed’, and as workers they have enforceable rights, including a guaranteed minimum wage, paid breaks, and holiday pay. The decision came in response to two test cases brought on behalf of drivers by the IUF-affiliated GMB in June.