Published: 16/12/2014
On  December 10, World Human Rights Day, some 3,000 members of the IUF-affiliated Gujarat Agricultural Labour Union (GALU) demonstrated to protest the amendments proposed by the newly elected government of India to the Mahatma Gandhi National Rural Employment Guarantee Act (MGNREGA), the world’s largest employment guarantee program. The protest was the launch of a joint campaign by GALU and the Self Employed Women’s Association (SEWA) to stop this attack on a program which is a vital lifeline India’s rural poor. 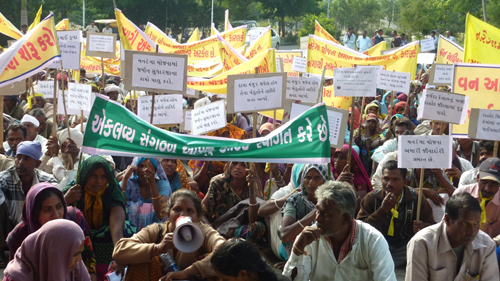 MGNREGA protects the right to employment of disadvantaged unskilled and unemployed workers by providing 100 days of annual guaranteed employment at the minimum wage. The program provides a consistent income to rural households, reduces migration to urban areas allows rural communities to access their right to food and water by generating durable resources..

The Modi government’s proposed amendments would reduce the scope of the program to only 200 districts out of 676, cut wages by 9% and transform it from a program based on community needs to a program of state control.

Paulomee Mistry, Vice-President of GALU and General Secretary of the NGREA Workers’ Union in Gujarat, says, “MGNREGA is the lifeline of rural workers, it should not be diluted. Constructive amendments like 200 days of employment and provision of a living wage like INR 350 per day are needed in this program.”

Shikha Joshi, General Secretary of SEWA Madhya Pradesh comments, “NREGA is like a ventilator for poor people who live in rural areas below the poverty line. They are able to buy two times more bread for their family with the help of wages earned from it. Proposed amendments in MNREGA will push them back into hunger and force them to migrate from their native places. We will fight against any changes that take away their Human Rights”

GALU and SEWA have initiated a campaign through which some 235,000 affected MGNREGA workers will send postcards to the Prime Minister’s Office describing their experience under the program, why it should continue as it is and what changes they desire in the scheme.