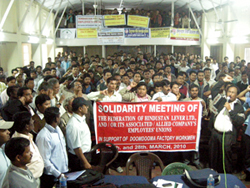 Representatives of 13 unions at 10 Unilever India factories travelled across the country to meet in Assam on March 27-28 in an unprecedented show of solidarity with the embattled union at the company’s Doom Dooma factory. For some unions, the meeting required an 84-hour, 4,200 kilometer train journey one way.

The two days were filled with meetings of both the Federation of Hindustan Lever Unions and a general body meeting of the Hindustan Lever (PPF) Workers Union from the Doom Dooma factory, which has been struggling for its basic rights in the face of vicious anti-union management attacks since 2007..

Situated in a tea plantation which formerly belonged to Unilever, Doom Dooma is a company town where Unilever exercises enormous influence – and worked hard to prevent the meeting. The police denied a meeting permit until the last minute, forcing the venue outside of Doom Dooma. Contractors working for the factory were mobilized to create disturbances and prevent union delegates from using public transportation to attend the general body meeting on the 28th. People hosting the visiting union delegates came under strong pressure to throw them out of their homes.

For some weeks prior to the meeting, the rumour had been actively propagated in the factory and in the town that the union’s activity would result in closing the plant (currently working at full capacity). The plant manager on March 15 accused union president Biswa Kumar Bakti of seeking to close the factory and evoked the possibility of violence. He similarly accused the IUF and its representatives in India of working to close the factory.

The conflict goes back to July 15, 2007, when management locked out 700 union members following worker protests over failure to pay a provision in the collective agreement due workers from April 1. The lockout turned to union busting, as management demanded that workers renounce their union membership and join a company-sponsored organization as a condition for returning to work.

When the lockout was declared over on September 3, workers seeking to return to their jobs were pressured to resign their union membership and declare their membership in a new organization created with management support during the lockout before being allowed to enter the factory. The conflict resulted in the suspension and harassment of union officers and members and the signing of a dubious collective agreement with the fake union created by management.

The union has protested in writing 7 times over more than 2 years against the illegal deduction of membership fees in the company union through the check-off system, but management refused to respond. The only response came when management threatened the union president on March 15 and accused him of working to close the factory by writing to the Unilever India head office to protest this egregious breach of the law.

The Federation meeting on the 28th unanimously adopted a resolution calling on Unilever to cease its illegal financial support for the company union and to agree to a general, secret ballot election to determine the majority union at the plant – demands which the IUF has pursued at the OECD for over two years.

Since October 2007, Unilever’s attacks on the union and the workers’ right to freedom of association have been the subject of an ongoing complaint at the OECD through the UK government’s OECD National Contact Point.