Published: 21/05/2014
On May 15, fast food workers in Israel joined the global action on International Fast Food Workers’ Day by highlighting achievements in organizing and gaining recognition. McDonald’s workers together with members of the Histadrut’s youth organization, the Working and Studying Youth Trade Union, visited dozens of McDonald’s outlets and updated workers regarding the collective bargaining agreement about to be signed. 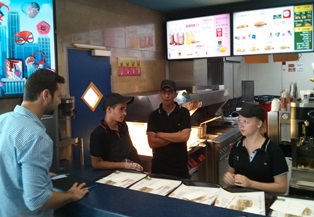 In Israel major organizing successes have recently been achieved in the fast food sector as the Histadrut’s Working and Studying Youth Trade Union has organized thousands of workers and secured collective agreements in a number of fast food companies.

In total, over the past two years, approximately 8,500 youth were organized in the fast food sector.