The Hong Kong Confederation of Trade Unions and the IUF affiliated Catering and Hotel Industries Employees General Union (CHIEGU) have joined unions supporting the T&G section of the UK’s Unite campaign for equal treatment for meat workers employed in the UK and Ireland in transnational retail giant Tesco’s supply chain. 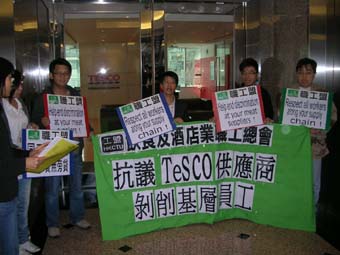 Meanwhile, in the UK, the powerful Equality and Human Rights Commission has announced that it is to examine the UK’s multi-billion pound meat industry in England and Wales for evidence of employment abuse and discrimination.

‘We believe the supermarkets desire to source meat more cheaply is contributing to a race to the bottom in the UK supply chain’.

‘Unite is calling on Tesco to use its influence to ensure companies in its meat supply chain sign a minimum standards agreement and to establish Tesco Ethical Model Factories’.