Home/News/ILO: enforcing workers right to form trade unions is the first step towards decent work in the fishing sector

Published: 20/08/2016
In August 2016 the International Labour Organisation published the report of a tripartite meeting, convened on November 25-26, 2015, in Oslo to discuss ways to tackle labour exploitation in the fishing sector. The conference brought together experts from around the world – representatives of governments, employers’ and workers’ organisations, including experts on Illegal, Unreported and Unregulated (IUU) fishing and human trafficking.
A joint IUF-ITF union team of delegates from NNN (Norway), Etu (New Zealand), Sentro (Philippines), and MTWU (PNG)  which attended the meeting voiced their long-standing commitment to upholding workers’ right to organise in the workplace. The ILO and national governments were urged to make freedom of association a key point in the discussion on elimination of human rights abuses in the seafood industry, as organised workplaces where workers are represented through their own union become immune to forced labour.
After two days of intense debates the meeting concluded that the first step towards decent work in the fishing sector should be “focusing on and listening to the workers and their needs, enforcing their right to form trade unions“. This tripartite consensus is a long-needed high level acknowledgement of the unique role that organised labour plays in defending human rights, focusing the ILO and other UN agencies’ engagement with national governments on ways to remove obstacles to unionisation.
Photo: trade union delegation at the conference. 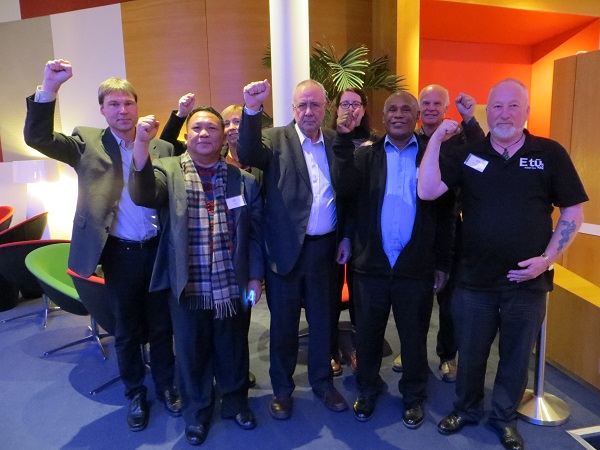