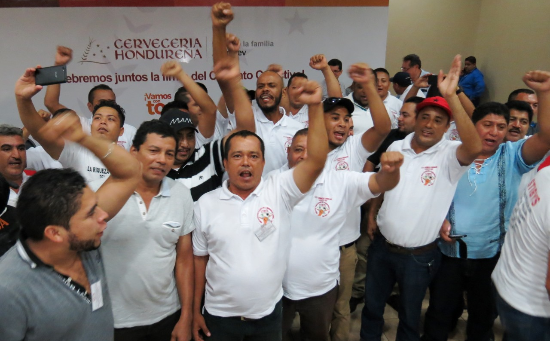 STIBYS won permanent employment for 400 outsourced workers through this successful agreement. With the end of years of precarious employment hundreds of workers will not only enjoy job security for the first time, but will also be able to fully exercise their trade union rights.

“In Honduras, outsourcing and job insecurity have been strongly promoted. Securing hundreds of permanent jobs sets a very important precedent for the country, “reported Julio Flores, the general secretary of STIBYS.

The IUF had called on AB InBev and The Coca-Cola Company (TCCC) to act to resolve the protracted negotiations in Honduras. The plant bottles Coca-Cola and TCCC is likely to acquire AB InBev operations in 17 countries including Honduras. The union thanked the IUF, the Latin America region and affiliates in both Coca-Cola and AB InBev for the concrete solidarity shown and for assisting the union raise issues with corporate Coca-Cola management in Atlanta.