In the midst of an unprecedented, nearly month-long series of hearings at the Ontario Labour Board involving unfair labour practices at three Accor Novotel hotels in the province, Accor continues to wage war against the fundamental rights of those who staff their branded hotels. 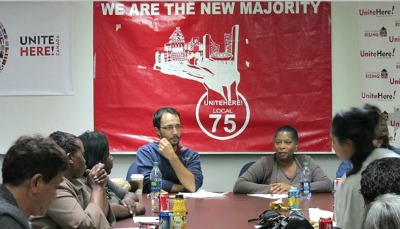 In the 2-2.5 years since-workers at the Novotel Mississauga, Novotel Ottawa and Novotel North York demonstrated strong majority support for union representation by signing union cards, Accor has disciplined, suspended and sacked workers for simply talking about the union on their breaks anywhere on company property.

When, on September 20 last year, local elected City Councillor Maria Augiameri confirmed that the union maintained strong majority support at the three hotels, Leading union activists at the Novotel Mississauga and Ottowa Novotels were disciplined and even fired for talking about it.

Limitations on employee speech – backed up by the threat of the sack – are no longer confined to the workplace. While business in North America increasingly defends union busting in the name of employer “free speech”, workers at the Ottawa Novotel are told to call the police if union supporters come to their door.

On February 9 – with the Labour Board hearings getting underway with massive documentation of Accor’s anti-union practices provided by Unite Here Local 75 – Eric Buitenhuis, Senior Vice President of Operations for Accor Canada, found time to attend a routine housekeeper administrative meeting where this message was again strongly intimated. On February 17, at a mandatory housekeeper staff meeting, the housekeeping manager solemnly informed the workers that under Canadian law it is illegal for union supporters to visit employees in their homes (it is not).

On an IUF fact-finding visit to Ontario in December last year, IUF General Secretary Ron Oswald met with Mr. Buitenhuis, discussing among other things the IUF-Accor agreement on trade union rights in which Accor commits itself not to oppose unionization efforts by its employees (read the report of the visit here). Accor management seems to have missed the point – their war on rights now extends beyond the workplace into workers’ homes. How soon before Accor workers are disciplined or fired for merely possessing a copy of the agreement?