An agreement between the Colombian rural workers union SINTRAINAGRO and Palo Alto Gnecco Espinosa Investments has brought a successful first round conclusion to a long, bitter struggle at the company’s palm plantation in Ciénaga district, Magdelena.

When the company refused to negotiate a collective bargaining agreement with SINTRAINAGRO the workers launched a strike which continued for 67 days. On January 14, 2010, armed gunmen entered the plantation and forced 185 out of a total of 200 workers to leave. 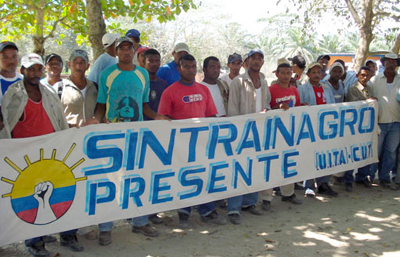 The company has now agreed to:negotiate directly with SINTRAINAGRO; rescind the mass sackings and reinstate workers under their previous contracts with no loss of service; pay all wage arrears including for the 67 days of the strike; pay by September 30, 2010 all outstanding commitments for wages, severance pay, bonuses, vacation, social security, pension and other amounting to USD 858, 450.00; a guarantee of no reprisals against workers who participated in the strike; and a company commitment to respect fundamental labour rights set out in ILO Conventions.

On June 30 the company and SINTRAINAGRO will meet to review progress and to deal with outstanding issues.

Luis Pedraza, president of the national food and agriculture union of Colombia, UNAC, congratulated the workers on their unity and perseverance.