Agricultural workers and farmers from nine states/regions in Myanmar participated in a two-day IUF training seminar on herbicides, focusing on paraquat and glyphosate. Members of the IUF-affiliated AFFM studied the severe harm paraquat causes to health and the environment. Paraquat – often sold in containers labelled only in Thai and Chinese – is used extensively in Myanmar on major food crops.

Participants also studied the harm caused by glyphosate, why it is not a viable alternative to paraquat and the risks of glyphosate-resistant GMO crops. Monsanto’s Roundup, labelled only in the Thai language, is sold throughout Myanmar for unrestricted use.

AFFM has developed an action plan to secure a ban on the sale and use of paraquat and reduction of herbicide use. Stricter controls include: banning chemicals labelled in foreign languages; labeling and instructions in the local language; restricted use in application to food crops; and an official register of permitted chemicals. 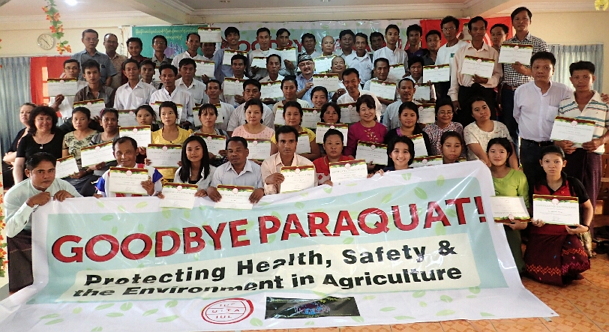