At Tetley we want you to enjoy your pregnancy without it being stressful – http://www.tetley.co.uk/Why-tea-is-great/Caffeine-&-pregnancy/A-healthy-pregnancy

UK-based teamaker Tetley is a wholly owned subsidiary of India’s Tata Group. Tata, the powerful Indian conglomerate, holds a 49.98% ownership stake in Amalgamated Plantations Private Limited, with whom it shares share the same office in Kolkata, the capital of West Bengal. Nearly 1,000 tea plantation workers and their families on the Amalgamated Plantations-owned Nowera Nuddy Tea Estate in West Bengal are desperately hungry. They have not been paid for all but 2 days work since August. They are being collectively punished for having protested the abusive treatment of Mrs Arti Oraon, a 22 year-old tea garden worker who was denied maternity leave and forced to continue work as a tea plucker despite being nearly 8 months pregnant.

Tetley is a member of the Ethical Tea Partnership (ETP). According to the ETP website, “The fundamental principles of the ETP standard are those of the Ethical Trading Initiative (ETI) Base Code which is closely based on International Labour Organisation (ILO) Conventions.”

The extended punitive closure of Nowera Nuddy is a catalogue of violations of ILO Conventions. On the issue of maternity protection, for example:

“Pregnant or breastfeeding women are not obliged to perform work which has been determined by the competent authority to be prejudicial to the health of the mother or the child.”

The government of India in 1961 adopted a Maternity Benefits Act stipulating that “No pregnant women shall, on a request being made by her in this behalf, be required by her employer to do during the period specified in sub-section (4) any work which is of an arduous nature or which involves long hours of standing, or which in any way is likely to interfere with her pregnancy or the normal development of the foetus, or is likely to cause her miscarriage or otherwise to adversely affect her health.”

The specified time period is “one months immediately preceding the period of six weeks, before the date of her expected delivery;”

The IUF has conducted extensive interviews with workers on the Nowera Nuddy Tea Estate which we will be publishing regularly. One woman worker had this to say:

Arti was asking for leave for several days, but the doctor kept refusing. The doctor threatened Arti when she went to ask for leave.

She went one Monday to ask for leave; she was refused. She went the next Monday; she was again refused. The doctor said: `Are you the doctor or am I the doctor? Don’t I know when you should go on leave?’

So she had to go to work. The section was very far. If we are even a little late, we are sent back and not allowed to work.

That day it was very hot and the sun was very strong. Even a healthy person would have felt ill. And she was in such a condition that she fainted. She was perspiring profusely. She muttered that she was not able to work and fell on the ground.

Another worker told us this:

Our sister has been asking for maternity leave since she was 7 months pregnant. But she was not granted leave. `Work and earn today’, `Work and earn tomorrow.’ `Work and earn this week, next week.’ This is how days just went by. She was angry and just went to work. That day, it was not even 9 am, she fainted and fell down. She mother was called and she came. She was fanned and taken care of. I did not go as i was working quite far away. When we went to weigh the leaves, I saw she was lying on the ground. I asked what had happened. They told me what had happened. The workers asked that a vehicle be sent. They said that there was no vehicle available and that the ambulance was out of order. If the ambulance can be given on hire for other things, it can be used to carry a patient. The ambulance was not made available and the workers were told that she should be got on a bicycle. Can you get a pregnant woman on a cycle? Can you get a patient on a cycle? We insisted that an ambulance had to be sent. They ultimately sent a tractor. We said: `how can you take her in a tractor?’ But we realized that her condition is serious and she needs immediate medical help. The sections number 2 and 3, male workers were working. We told them that we need to talk to the doctor immediately. It was our duty to do so. It is our duty to go together. It is not an individual’s issue. Because the doctor has systematically neglected all of us workers. And we went there. We asked the doctor: why do you not grant leave? 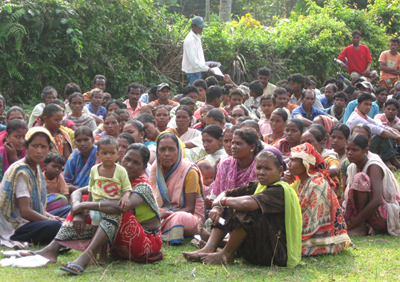 For daring to protest, these workers have been denied all wages and rations since early August.

You can support their struggle – Click here to tell Tata and Tetley Tea to stop starving workers now! You can also use the features provided on the Tetley Tea website to send the company a message, or use the freephone number provided to give them a call!