Australian unions in the state of New South Wales led by Unions NSW (formerly the Labour Council) held a demonstration on August 30 in front of the Nestlé-owned Nespresso shop in Sydney’s city center. The action, which resulted in the temporary closure by management of the Nespresso shop, was taken in support of the IUF-affiliated SBNIP representing workers at the Nescafé factory in Panjang, Indonesia. The SBNIP has been struggling since 2008 for the right to bargain a collective agreement including wage rates. Instead of negotiating, Nestlé management has persistently sought to undermine the union, violating fundamental trade union rights by promoting a yellow union and harassing and intimidating IUF members.

Mark Lennon, Secretary of Unions NSW, who was present, said “ Unions NSW will continue to support the efforts of the IUF to secure a collective agreement for Nestlé workers in Indonesia. We reject the anti-union tactics being used by Nestlé to undermine workers rights.”

Charley Donnelly, IUF-A/P Regional President and General Secretary of the National Union of Workers, Australia (NUW) said, “ Its time Nestlé stop giving Indonesia workers the run around and act like a responsible global company. Its time they stop Nespressure and start negotiating a new collective agreement with the IUF affiliate covering wage rates.” 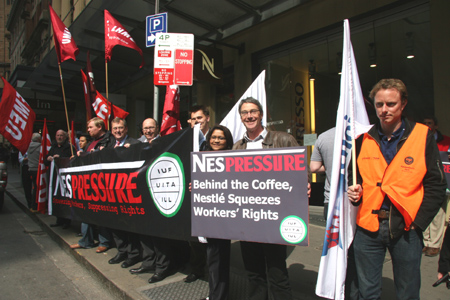 “Nestlé’s abuse of workers rights to bargain collectively and have their union recognized in Indonesia will be exposed to workers and consumers around the world. On behalf of the NZ Dairy Workers Union I was proud to be part of today’s demonstration outside the Nespresso shop in Sydney. Nestlé can expect public demonstrations anywhere any time until they respect international labour conventions in Indonesia” said James Ritchie.

IUF Asia/Pacific Regional Secretary Ma Wei Pin had addressed a meeting of Unions NSW the week prior to the demonstration, following which some 40 union leaders present immediately signed a petition to Nestlé CEO Paul Bulcke calling on management to immediately and unconditionally enter into genuine negotiations with SBNIP for a collective agreement including negotiation on wages. This petition was conveyed to Nestlé through the IUF Secretariat in Geneva.