The IUF’s Austrian affiliate representing food and agricultural workers, PRO-GE, has issued a call for action to stop the negotiations on the EU-US trade agreement, the TTIP. PRO-GE supports trade which can create decent jobs and contribute towards sustainable food and agriculture, but condemns the TTIP (like the recent EU-Canada agreement) as a purely deregulatory program for lowering labour, environmental and food safety standards, attacking and privatizing public services and reducing the regulatory capacity of governments through investor lawsuits.

On the basis of what is known from the leaked proposals from these top-secret negotiations, says the union, and the total exclusion of labour and civil society representatives, the negotiations must be stopped. These positions echo those adopted by the IUF Executive Committee at its May 15-16 meeting in Geneva, which have also been published as the brochure Trade Deals That Threaten Democracy. PRO-GE also calls for the exclusion of food and agriculture from trade agreements in order to defend sustainability and food sovereignty. The union’s statement on the TTIP is available (in German) on the PRO-GE website. 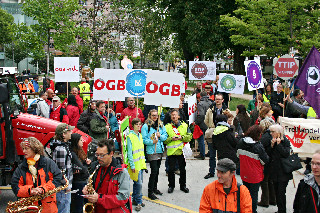 May 16 in Linz, Austria – IUF affiliates and the Austrian Trade Union Federation demonstrate for a stop to the secret TTIP negotiations.