The IUF-affiliated PRO-GE together with civil society organizations in the STOP TTIP coalition demonstrated in Vienna on May 31 outside a meeting of the new federal government to demand that Austria reject the Comprehensive Economic and Trade Agreement (CETA) negotiated between the European Union and Canada. The treaty, whose final text was only published in February following years of secret negotiations, contains many of the toxic elements features which have generated mass opposition to the better-known EU-US TTIP, which is still under negotiation.

CETA contains the investor-to-state dispute settlement mechanism (ISDS) which allows corporations to bypass national legal systems and directly sue governments; opens up virtually the full range of public services to privatization and makes it difficult to bring them back into public ownership; extends patents on life-saving medicines and other forms of corporate intellectual property; and would lead to a lowering of worker and consumer health and safety standards and environmental protection. 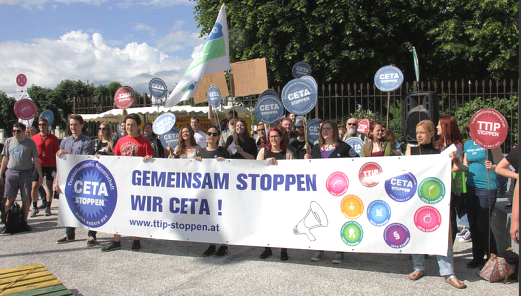 While it is not yet clear whether the treaty would have to be ratified by both national governments and the European Parliament to enter into force, the European Commission has proposed that it enter  into force ‘provisionally’ while the process is sorted out! PRO-GE and STOP TTIP are therefore calling on the Austrian government to reject the treaty when it is presented for signing at the upcoming meeting of the EU Council of Ministers.