The IUF-affiliated Bangladesh Agricultural Farm Labour Federation (BAFLF) and  National Women Farmers and Workers’ Association (NWFA) jointly organized a public meeting at the National Press Club in Dhaka on 17 October 2019 to demand the government rescind its decision to authorize the commercial release of genetically-engineered ‘Golden Rice’. In February 2019, the agriculture minister announced that commercial cultivation of golden rice could start “within three months” . The decision is now pending approval from the environment ministry.

Swiss-based Syngenta, now owned by ChemChina, owns the rights to Golden Rice. Promoted as a solution to Vitamin A deficiency by the International Rice Research Institute and the Gates Foundation, Golden Rice in fact contains little beta-carotene, and can only retain the little it has under strict conditions which are inaccessible to the working people who are its alleged beneficiaries. A single carrot contains the same amount of Vitamin A as 4 kilograms of cooked Golden Rice. Poverty and the lack of access to a diversified diet are the causes of Vitamin A deficiency. Released into the environment for cultivation, GM rice is a potent threat to bio-diversity. 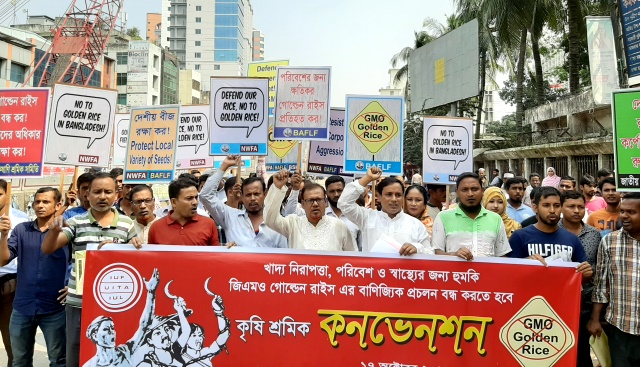 BAFLF and NWFA reaffirmed their call for the government to ban the commercial release of Golden Rice and the cultivation of genetically modified BT brinjal (eggplant), introduce a strict bio-safety law, provide support to farmers preserving traditional seeds and promote agro-ecology.