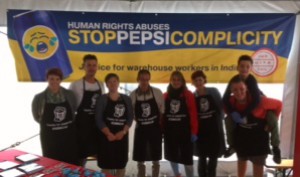 The IUF-affiliated FGTB-Horval in Belgium joined the Manifiesta, an international and critical analysis of the conflicts on the planet, as well as a show of solidarity with oppressed people, on September 17-18 and expressed solidarity with the “STOP PEPSICOmplicity!” international union campaign of the IUF. More than 18,000 people visited the festival this year. The union called on PepsiCo to remedy the right abuses in India and Pakistan and distrubuted the leaflet of the campaign to the activists who have joined the festival.