Published: 10/04/2017
The union of workers at the Bumi Menara Internusa (BMI) seafood factory continues its fight against abusive casual contracts and for access to social security for all workers. BMI is one of the main Indonesian suppliers to the global seafood industry, supplying most internationally known seafood brands.

While the company employs some one thousand workers at its factory in Lampung, only 50 have permanent employment contracts; the rest have worked as daily workers for up to 5 years. Many women workers have been forced to work night shifts for more than a year; night work was introduced in 2015 with no provision of transport or a shift rotation system. A majority of workers have been excluded from the legally compulsory health care and social security system. Management links workers’ inclusion in the system to performance indicators and attendance as a means to pressure active union members. 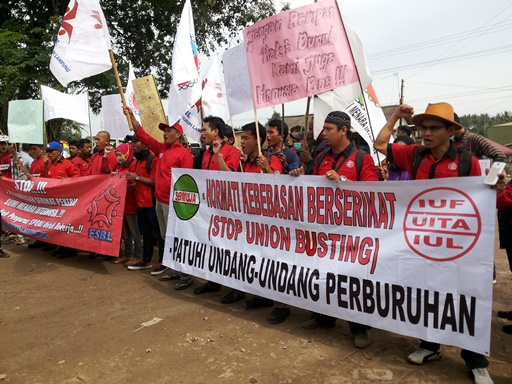 In 2012, BMI workers formed a union to challenge abusive employment practices. The company responded with intimidation and discrimination against union supporters, including dismissal of the union’s chairperson and the education secretary. Since then, the workers have been fighting for full recognition of the union and for meaningful collective bargaining. The union’s main demands today are to upgrade casual workers to permanent employee status, to register all workers with the social security system and to introduce shift rotation and transportation for the mostly female night shift workers.