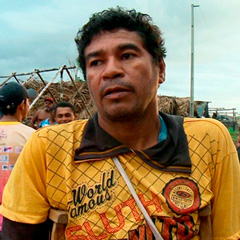 The toll of violence against rural workers, peasants and all those defending human rights, the struggle for land and the rights of indigenous peoples in Brazil continues to rise. On January 9, rural worker and land reform militant Valdemir Resplandes was murdered by gunmen in Anapu, the city in the state of Pará where American activist nun Dorothy Stang was murdered in 2005.

Brazil’s bancada ruralista, the powerful agribusiness lobby whose votes in Congress help sustain President Temer, has aggressively pursued its agenda aimed at rolling back land rights and legal protections for small farmers and indigenous communities to feed their expanding appetites. Impunity protects the perpetrators of violence.

In September 2017, following the murders of Terezinha Rios Pedrosa and her husband Aloísio da Silva Lara, rural worker, peasant and cooperative leaders in the state of Mato Grosso, the IUF Latin American regional secretariat addressed a letter to the Brazilian authorities, asking how long union and peasant leaders and those defending the environment would continue to be murdered with impunity. There was no reply.

By the end of October 2017, the Catholic Church’s Pastoral Land Commission had already recorded 63 targeted rural assassinations – higher than any year since 2003.