A delegation of IUF activists visited the Unilever-sponsored Moscow International Tea Symposium to raise a scandal about the unjust labour practices being spread around the globe by this company. Unilever is one of the largest producers of tea bags (brands Brooke Bond and Lipton) and is becoming more and more the focus of criticism for destruction of permanent jobs.

Union leaflets were distributed at the tea exposition and a protest letter against the increasing use of “disposable jobs” in Pakistan was handed to Unilever’s Brands Development Manager in Russia. “The tea business is becoming more and more important for Russia, which is already the world’s largest tea importer and imports are expected to increase by 5% per year,” said Galina Yurova, international secretary of the Agro-Industrial Workers’ Union of Russia. “It is important for us to show solidarity with tea growing and producing workers in other countries, especially in Pakistan, where Lipton workers are fighting for the recognition that they are Unilever employees and not to be discriminated against”. 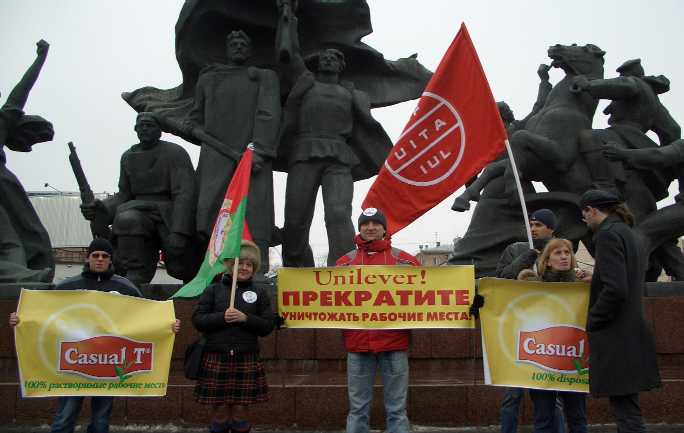 After leafleting at the Symposium, union activists continued leafleting on the streets of Moscow and joined in a solidarity picket against job destruction and spreading casualization in Lipton tea factories with “Casual-T” and “Unilever! Stop destroying jobs!” posters.

Click here to view a short video clip of the Moscow action.